Fetish Fridays! I Got Nothin’…

So…uh…here’s a picture of a guitar that kind of looks like a cock and balls.

I know some of you guys are going to accuse me of being lazy but that’s just not the case…okay, okay, just posting a picture of a cock and balls guitar is kind of lazy, but it’s not my fault.

Nowhere. That’s where. Believe me, I looked. 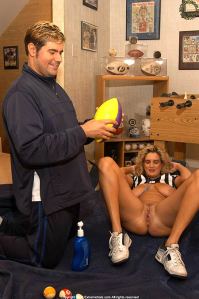 This isn’t rocket science…it’s 2009 dammit, I should be able to find some dude shredding his way through The Nuge‘s Wang Dang Sweet Poontang on his rock hard Wangcaster somewhere on the internets!

And speaking of the internets and what it has to offer….

You mean to tell me I can find women and men willing to shove everything from a Nerf football to a bowling pin into every hole imaginable, but no one has ever used an electric guitar (never mind one actually shaped like a cock and balls) in one of their wack-a-doodle insertion photo/video shoots?!

I really expected so much more from you this Friday.

2 Responses to “Fetish Fridays! I Got Nothin’…”