I just can’t get enough of David Lee Roth this weekend…so let’s waste some time playing video games like we did in the 1980s! 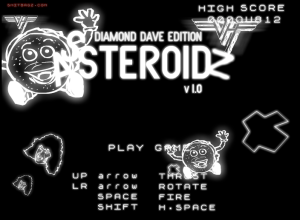 Sometimes a song comes along that just makes my day:

Yesterday, The Wife and I heard a commercial for some bar on 6th Street on the radio…it was all, “BABES, BOURBON, AND BEADS! COME ON DOWN TO THE DIZZY GRIZZLY (not real name of bar) AND GET FUCKED UP WITH YOUR TITS OUT IN FRONT OF A BUNCH OF DATE-RAPEY FRAT GUYS! OOOHHH YEAH!”

Okay, I’m exaggerating a little bit…but it did get me thinking about the art of tit flashing. Being a man, I can only appreciate the sudden, unexpected appearance of a bared breast in public. I have no idea what it must be like to feel the adrenaline rush of smashing down the walls of this patriarchal society by simply unleashing one’s breasts in a crowded place. Sometimes, just a nipple and areola quickly slipped out the side of a woman’s collar is enough to make them feel like Maverick heading down that highway to the danger zone…or so I can imagine.

Now I’m not talking about stripping, Mardi Gras, or some Girls Gone Wild breast bearing…something just doesn’t seem equal there. There’s some sort of payment involved: money, beads, finally getting back at your father…no, the best breast exposure is the spontaneous, excitement fueled kind. Something like only a Van Halen concert or a Blue Angels air show could induce in a woman. The overwhelming desire to “show the whole goddamned world my tits“, no matter what size, shape, or color! It’s not all, “Look at me, look at me”…It’s bigger than that. It’s a real Ben Franklin kind of move…it’s a call to action, a declaration of freedom, a statement of power!

That being said, I think there are some dangers involved in tit flashing a woman must take into consideration: Men. Now don’t get all defensive guys…we all know there’s at least 1 out of 5 guys in a crowd who’s gonna’ piss all over a woman’s tit flash by doing the unspeakable…..the unsolicited tit grab!

Seriously, can you Cromags just keep your filthy paws away for the 10 to 15 seconds it takes a woman to physically express and expose her Pointer Sisters? A woman’s bare breasts are not public Paw Patties for you to sully up on a Saturday night. That’s why every Electra Woman needs a Dyna Girl…a female sidekick to help keep the animals at bay. You might think having a man around to run interference during your liberating expression of toplessness is a good idea, but that usually leads to fighting or worse…the inhibition factor. Sure, men have strong shoulders that you can sit on while celebrating your freedom, but usually a boyfriend or husband (or even a brother) is more of an outer impediment to free activity, expression, or functioning of tit flashing. Ladies, travel in pairs or in packs with other ladies, because, only another woman can fully understand why you need to take your tits out (ever so briefly) and how to keep meddlesome grabby guys away from your Betty Boops with a minimum of fisticuffs.

One last thing…Men, looking is okay…in fact, that’s exactly what you are supposed to do. Remember what you parents used to say, “Look with your eyes, not with your hands.” These women are caught up in a dissociative fugue of sorts…do not break their concentration by reaching out for them. Cheering, hooting, and clapping are a definite must…it’s your way of being the woman’s Iceman, a good natured rival that pushes her to exceed her abilities as a regular gal and to achieve the courage and confidence only possessed by the inner-Maverick hidden beneath her shirt.

There you go…whether you agree or disagree is fine with me…but if you are a man or a woman who has never felt the urge to bear her God given Bra Buddies in an act of feminist expression, you might want to wait to cast that stone. Who knows, one night at a Skynyrd concert or during the Superbowl, maybe, just maybe, the spirit of Ben Franklin, Betsy Ross, or even Kenny Loggins will make you do the most liberating thing you have ever done….The Tit Flash.